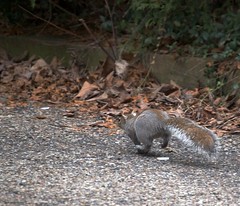 Squirrel Butt
Originally uploaded by t3knomanser.
I saw a squirrel. It went like this: *omnomnomnom*.

When it comes to geography, Mars does not fuck around. Seriously, our planet may be larger, but if anything, that makes Martian geography all the more impressive. Of course, Mars has much weaker erosive forces; no water, thinner air and lower gravity. I guess that's the tradeoff- life or impressive geography.

If you want to make a good showing in the PA primaries, you need to win Pittsburgh and Philadelphia. How do you get Pittsburghers on your side?

Stand shoulder to shoulder with Jerome Bettis and Franco Harris, two of the most beloved Steelers in history. Bettis was "The Bus", a running back that could not be stopped, and Franco Harris caught the "Immaculate Reception", a catch so dramatic it's become part of the local mythology; he's Pittsburgh's own Theseus.

Compared to Clinton, who's been rubbing shoulders with an unpopular governor (who said, in effect, that his state was full of too many racists for a black guy to win it) and a moderately popular Pittsburgh mayor, Obama couldn't play to the locals any better. Throw on top his endorsement from Bob Casey, our very popular Senator, and he really shows a knowledge of the local culture.

Will he win PA? Iffy. But Clinton's lead in this state will be far smaller than she thinks it should be.
Collapse