Finally, a reason to go to church. 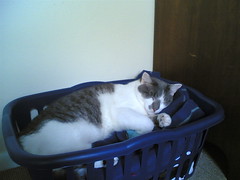 For those unfamiliar, this is Rochester. That is a full-sized laundry basket. He weighs in at around 14 or 15 pounds, and beneath the layer of fluff, this is pretty finely honed muscle.

While any human can overpower him in brute strength, he makes it exceedingly difficult to overpower him while performing complex tasks. Giving him a bath, for example, is an incredible challenge for two people and nigh impossible for one. Giving him a pill? Giving him the two pills required to make any intestinal worms go running for daylight?

Minna and I together were able to get one down his throat by sheer surprise. He didn't know precisely what was going on, just that he wanted none of it. After that though, he was ready to rend gobbets of flesh from our bodies before enduring the experience of swallowing a pill again.

But I've got a useful wife. While blood gushed from my arteries, she broke out the official Crocodile Hunter manuevers. Since she couldn't hold the cat and administer medicine, she dropped to the floor and engaged him in a bout of wrestling. After a moment, she managed to get the Steve Irwin Crocodile Submission hold onto the cat- she sat on his haunches, lifted his head back and pried the jaws open. Pill in, mouth held shut, and a few moments later, the pill was gone into his bowels.

It was dramatic.
Collapse