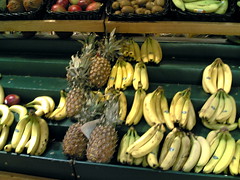 There are certain reasons that I might apologize for something.


Off the top of my head, that covers it. In both cases, we're talking about apologizing for actions that I regret.

What I do not apologize for is speaking my mind- even if it offends people. I don't ever regret being open about my arguments. My thoughts are mine, and if you have a valid argument against them, I would be most interested in hearing it. I do not expect, or require that people agree with me. But if you're going to discuss your point-of-view with me- be prepared to defend it (if I find it disagreeable). Especially if the conversation starts with you entering into a debate. When I join the debate, don't suddenly be offended that I rip your arguments to shreds.

Now, one thing that does piss me off is when people make these sorts of posts that are oblique references to something else that none of their readership knows about. So, let me clarify this whole thing.

ellie is pissed at me for ripping into Christianity and religion in general. In my mind, this was a dispassionate conversation about a topic- obviously other people didn't feel that way about it. That's

ellie's problem, not mine. It was, at no point, a personal attack. It displeases me that it was interpreted that way- but I don't regret my part in it. Nor should this be news to anyone- I think it's been well established that I'm a confrontational and debate oriented person, so much so that I'll debate subjects that I don't have any interest in, and I'll take sides in a debate I don't agree with for the sole purpose of honing my rhetoric.

Since religion, and specifically atheism is the topic du jour, let me present a good BBC interview with Richard Dawkins, "King of the Atheists". He was also on the "Colbert Report" with mildly humorous results. Personally, I've got an order out for The God Delusion and eagerly await it being in stock again.
Collapse